Sana'a, Yemen
"Its value lies ... in the unforgettable impression made by the whole ­ an entire city of splendid buildings combining to create an urban effect of extraordinary fascination and beauty."
Read all about the architecture of Sana'a 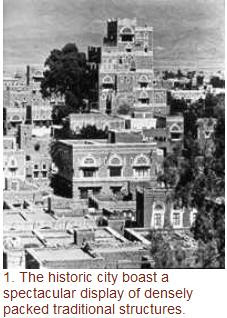 Cairo, Egypt
I recently found out what "art nouveau" is. Many of the faded Cairo buildings are art nouveau then. So Cairo's golden age must have been around the time these were built: between the World Wars. "No city on earth has as much architectural variety as Cairo..." While it's a jumble out there, the pictures on this Cairo architecture website remind one that taken individually there are fine buildings the whole city through. To love the look of Cairo, zoom in. Well, there's also the Nile. It's hard to screw that up.

Yola, Nigeria
In Yola, architecture is evolving. It's fun to watch. I'm in a "modern" part of Girei, outside Yola proper, in which the occasional storeyed house has been built. Most houses are either very much mud brick and thatch affairs, covered in earth, or made of mud but coated in cement. I live in something "in-between": it's built of cement, but so earthily, you imagine that it would soon return to join the rust-brown earth from which it came. I assume the walls are so soft because they use cheap cement mixtures, i.e. high ratio of sand to cement. I like it. The layout is simple: one long rectangle, one level only, divvied up with parallel walls into identical sections. Each section is a main door leading to a room, with an inner door and another room and a bathroom behind it. Join these side to side in a straight line.

Lagos, Nigeria
Lagos would be the Cairo analogue. Money is flowing in from "somewhere" and it's going into building at perhaps the most rapid pace in the world. To make any sense of this city's architecture, zoom in tightly. There is no method to the madness. My parents' home is actually very fine, and there's a neighbouring house that I find very unusual and inspired. It's solar-powered, very large and square, white, with huge open balconies on the top floor. The open plan suggests Hacienda? The white-block-ishness is Islamic? Balustrade would be some sort of traditional - what? Renaissance Italian? What is this place? Someday I'll find out. I can just ask the owner, a cool lady I haven't seen in years. In Lagos, the government is doing up the highways from horrific to nice, also very rapidly. Add electricity and water and we'll be on our way...

Got to run now.
Posted by t at 12:29 PM 1 comment:
Email ThisBlogThis!Share to TwitterShare to FacebookShare to Pinterest

You know, I owe you a lot of writing. In particular, those film festivals in San Francisco, I still need to tell you about the films. With the time it takes for them to become commercially successful, some of them may just be making it into the big theaters now.

For now, I'll introduce a film (and novel) that were very popular at the San Francisco International Film Festival of 2007. Not the best film in the world, but notorious, so it brought long long lines of actual Arabs (as opposed to curious non-Arabs.) The Yacoubian Building. The novel can be bought anywhere i.e. local bookstores. Watching the film is of course, quicker. The director was really young and cute. There's something very French about Cairo, or at least the way Cairo of the "good old days" is portrayed.

I'll tell you more about that Arab Film Festival of 2006. It was sooo full. One of the films people crowded to see was "Kiss Me, Not On the Eyes." Raj loved this film. I didn't understand it, but still liked the sensuousness - dance, colour, beautiful woman, colour, red dress against black hair, dance - in the market, I walked through a place like that in the market in my last week in Cairo, where they sell cheap bras and stuff, and a kid stands on a table advertising, (dancing?)

I just read the synopsis written in the AFF pamphlet for this film. Now I get it!

"Tradition, culture, expression, and passion collide in this sensitive exploration of the changing nature of love and romance in modern Cairo. Young Dunia balances two lives: one as a promising graduate student in poetic arts, the second as the daughter of one of the greatest legends in belly dancing lore. Between intensive studies and even more extensive dance training, she manages to wrestle with intimacy issues regarding arduous suitor Mamdouh, forcing herself to make hard choices between what she wants and what she believes. When she secures the opportunity to work with an esteemed and outspoken literature professor many years her senior, she discovers a new kind of sensuality that challenges every assumption she has ever had about love. A well paced and often hypnotic feature that draws the viewer ever tighter into its inexorable conclusion."

Maybe I'll understand this film better when I'm older. Like how dumb was "Love Story" when I was a kid? I couldn't wait for the chic to die, the film was so boring. Then I watched it again during the holidays in Sophomore year of college, and thought, huh, I guess it's this love story going on, they're not altogether stupid following each other around and then being miserable when one dies. Gosh, I used to hate those misery stories. Like Beth in Little Women...what was her story? She was sick, and then she died. Julianne Moore once said Beth was her favourite. I thought, eeew, what about Jo? She was alive, tough, and she like married the Professor ;)

What else was I going to write? Ah, this chic, Nigerian, named Chimamanda is good. I'm excited for her 'cos she got a MacArthur fellowship, aka money to do whateva, suckas. I'm reading a fiction thingie of hers in The New Yorker and thinking "wow, sweet, I actually want to read more." Then it goes beyond two pages, and I'm starting to feel lazy...still going to read more. Still haven't read either of her novels but that never stopped me recommending her, right? A trusted friend swears "Half of A Yellow Sun" is amazing. Igbo nationalists, hehehe. I recommend and gift "Things Fall Apart" a lot. Read that one. It's by Chinua Achebe, whom Chimamanda obviously loves, understands, and emulates as a writer. You'll learn more in 100 easy pages about "Africa" and her "culture" than in months of seminars with big oyinbo grammatical talk.

I'll be back. Peace and love.
Posted by t at 4:54 PM 1 comment:
Email ThisBlogThis!Share to TwitterShare to FacebookShare to Pinterest

It's cold here. Hehe.
No, seriously, Yola is probably a tough sell being so "isolated" and all, but I feel it's paradise. Nowadays the nights get "cold" - in the late teens. That's Centigrade, not Fahrenheit. It's about 70F at night. Ah, the joy. The days now reach about 30, as opposed to nearly 40 (I agree, 40 is hot.)

I still haven't found an inexpensive swimming place...though I bought one of those inflatable kiddy things to fill up with water for a soak one of these mid-days.

I just finished Meet the Robinsons. Nice film. 4 1/2 stars: 4 stars plus 1/2 for Rufus singing that "give me just one more chance...Another Believer" song. Love the film. Love Rufus. Kids would actually be tickled. And it's so intelligent, the type that gets better the more times you watch. KEEP MOVING FORWARD, indeed.

You know another very science-y cartoon worth watching? Osmosis Jones, from 2001. It was a pleasant pleasant surprise.

I FINALLY watched Ratatouille. RATATOUILLE gets FIVE STARS. Aw, what a sweet film. Basically, this rat is a chef. French. Silly accent. The part near the end when the critic tries the food? Divine in its silliness. I'll always watch cartoons. It actually won the Best Animated Feature Oscar in 2007. Maybe the best of the decade. I wonder if kids judge in this category? Or is that why there's always something for the grownups in these big-studio animateds?

Some kids were visiting during the holidays (little cousins, sleeping over) and I think one of them was IN HEAVEN just watching cartoons on a laptop late at night until he fell asleep. The twenty(?) films are all on a DVD I bought in December for =N=300. I promise never to buy pirated media while in a Western country. But out here, oh yeah...
Posted by t at 5:21 PM No comments:
Email ThisBlogThis!Share to TwitterShare to FacebookShare to Pinterest

Stories by Sarah Thurmond, on TENNIS.com

When You’re Good to Martina…
You may have heard that Martina Navratilova came in second on the British reality show “I’m a Celebrity…Get Me Out of Here!” but what you may not have heard is that she caught the acting bug. (Possibly through one of these critters?)

In an interview with The Times of London, Navratilova talks about auditioning for the role of Mama Morton in the West End’s production of Chicago. I know what you’re thinking: Isn’t that the role that earned Queen Latifah an Oscar nomination in the movie version of the musical? Wait…can Martina sing? Here’s what she says: “I have no idea whether my vocal cords can handle it, or whether I'd be able to cope with the lifestyle. I'd do it if it was a two- to three-week run.” The latest word is that the role is hers if she wants it, but she's too busy to take it on.

Tennis Stars at Night…
Is space becoming tennis’ version of the Hollywood Walk of Fame? First, Rafael Nadal got an asteroid named in his honor after he beat Roger Federer in the final at Wimbledon last year. Now Jelena Jankovic has a star. According to her website, the star is named JJ and “shines in SC2 Hercules constellation of North polar region.” In other Jankovic news, she switched management agencies, from Octagon to IMG. She is also is joining IMG Models. All you models-of-the-moment better watch out!

Think She Cares?
Thedailybeast.com (former Vanity Fair editrix Tina Brown’s current affairs site) released its “Top Ten Thinking Man’s Sex Symbols for 2008.” Who tops the list? Tina Fey? No. Sarah Silverman? Uh-uh. It’s ANA IVANOVIC! Yep, the defending French Open champion is No. 1. The writer of the piece, former TENNIS Magazine contributor Touré, says Ivanovic “is blowing men away with a butterscotch-colored face that’s all smooth slopes and haunting eyes. Ivanovic is the most beautiful female professional athlete of all time.” Sorry, Touré, but the only eyes she’s haunting are those of hunky Fernando Verdasco.

Posted by t at 10:48 AM No comments:
Email ThisBlogThis!Share to TwitterShare to FacebookShare to Pinterest
Newer Posts Older Posts Home
Subscribe to: Posts (Atom)