And I found it just when I was starting to despair that there were not enough female lead characters in mythology.  Now I see that there are some: Serena, but also the big Greek  names - Diana, Venus, ...

Advertisement: Read my books. ###Three Sisters, novel #1 here###
Posted by t at 8:18 PM No comments:
Email ThisBlogThis!Share to TwitterShare to FacebookShare to Pinterest

Met up with a music-reviewer friend yesterdayish and was reminded how many new albums I've not yet experienced.  So now I've downloaded a lot of brand new Naija music - I can't wait to listen to everything.

I'm starting with Ajebutter22's What Happens In Lagos - the sound is beautiful so far (I'm only two tracks in, ok by the time I'm done with this post, I've heard the whole album once.  It's really nice. )
I really badly liked his first album too - Anytime Soon.

Quiz. Who was 1 of the 1st ever to make house music pop in Nigeria? To do vibey sing rap? To make funny English/Yoruba songs? pic.twitter.com/E7ZdT1AJSt
— BELLA 🦁👑 (@BellaAlubo) November 23, 2017

Next up (alphabetically) is BOJ's Magic album which I've sort of heard half of before and which is definitely very good as well.
Then:
Falz's 27. 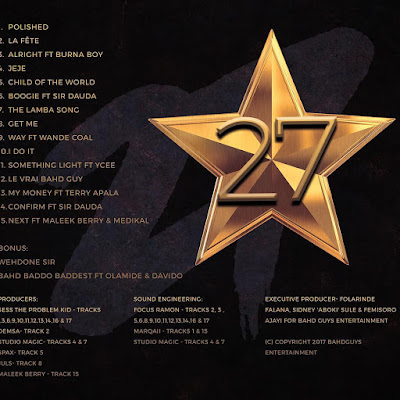 Falz is super-popular because he is not only a solid rapper-musician but also a top-notch comedian-actor-personality.  Ekiti kete!

I wish them
more collaborations and bigger accomplishments.
Let's form Voltron y'all.

Niniola's This Is Me.  (Ekiti again.  We rock.)  I think she's doing a show like everyday from now till Christmas lol, her energy is incredible.  #Maradona  #AbsoluteStar #Workout
Check out #OfficialNiniola


And:
Olamide's Lagos Na Wa.
Continuing his #YBNL group's tradition, here's the megasupermusicstar's annual stealthy album drop plus fabulous year-end concert.  He's moving the live concert to the Stadium (Surulere) this year.  (That's good - I don't deal in Eko Hotel events, to be honest.  They're usually rowdy and just silly - they start arbitrarily late, many hours late, and I don't understand sit-down show-off concerts with red-carpets celebrities and worst of all things, they're indoors, and expensive, and probably better experienced on TV, and I would just not do that to myself.)
#IAmMainland

I don't ask anything of Olamide because he already completely did everything you could ask four years ago with album #3 (or 2, depending on if you count Rapsodi as #1, from before Yahoo Boy No Laptop and the ensuing fame) Baddest Guy Ever Liveth.  So I get the Olamide/YBNL album every year, it's usually good.   It may be that he's gone for a new sound with this one - I'm curious to hear it.

Later:
Aramide's Suitcase album and of A-Q's Blessed Forever, when free downloads or street sales become available for these two, I suppose.  I know they both do very good work - Aramide's soul/alternative/guitar sound and A-Q's storyteller rap.