Don't forget to follow the links to read official synopses and watch the film trailers!!!

The Short Films
I already mentioned A Stranger in Her Own City, the Sana'ani film about a "tomboy" named Nedjmia. There were seventeen other short films at the festival, arranged into programmes of four to six films each. I missed most of the shorts - sad sad sad. I caught Yasmine's song, La Femme Seule, and bits of Beit min Lahm and Little Beirut.

Yasmine's Song is probably very similar to The Syrian Bride, an award-winning full-length feature film that I'll soon watch. Both are marriage stories focusing on the separation caused by the Israel-Palestine conflict. At the end of the short film, Yasmine and her lover are on opposite sides of a freshly-built fort-quality wall and the image is moving, to say the least. 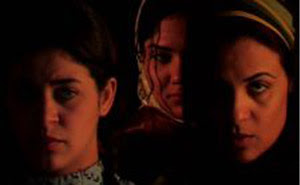 I enjoyed being able to translate many of the film titles, including Beit Min Lahm - House of Flesh - which thematically resembled a European taboo-sex-lite film. I believe the story was a mum and her daughters in a love web with a man. The images were all in shadow; deliberate, a good and gentle art film.

Little Beirut showed unrest among the Lebanese émigré in France.

La Femme Seule is about a Togolese housegirl. One of the most special and original films I've ever seen. It's a story about a domestic worker that is entirely from her point of view, in her voice, with still pictures. It's in French with subtitles. To all Africans, film-lovers, and especially filmmakers: Watch this one. Trust me.

I wish I had seen many of the others. (That's what I get for being late.)

The Not-Short Documentaries
I saw Occupation 101: Voices of the Silenced Majority, remember? By now you ought to have hunted down and hosted a viewing party for this political film. There was a special high-school viewing of this film and discussion with the directors afterwards. A favourite scene shows footage of an Iraqi diva, maybe five years old, animatedly complaining about how the explosions have spoiled her things. Really. I want to see her again.

You also remember Goal Dreams, another poignant Palestine documentary, about hope against all hope? In this case, the hope was to build a Palestinian team and qualify for last year's FIFA World Cup. Little did the coach know that the biggest challenges would have nothing to do with playing ball.

Dam Akhii, or The Blood of My Brother (watch the trailer) was an Iraq death film. A man is killed, for no reason, like thousands and thousands, in Iraq. What is the family feeling, how are they living, how do they cope? That Iraqi communities have been presented with such horror is troubling. One of the surprising moments in watching this film was that a fellow audience person gasped as a ram was slaughtered in a ritual marking the man's death...where was her expression of horror when the man was slaughtered and buried, as his mother beat her chest and cried? 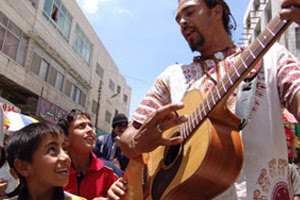 I Know I'm Not Alone is a crowd-pleasing documentary about a crowd pleaser. He's an American musician, a silly man, a deep man, who takes his music to the war-ravaged areas of the Middle East to meet, to greet, to laugh, to heal. He meets undergound Iraqi rap musicians who are inspired by the black struggle in America. He needs no prompting to start strumming his guitar and belting his sing-along song HaBiiBiiBii HaBiiBiiBii HaBiiBiiBii HaBiiBi.
Habibi means beloved, and is to Arab pop music what Corazón is to Spanish pop, or Love to English, that is, the most (over-)used word in the songs of the language. This film follows the adventures of an ambassador.

All these are very highly recommended. Of the documentaries I missed, I would have especially loved to see Linda and Ali, about a cross-cultural couple: Linda is from Arizona, while Ali is Qatari.

The Feature Films
Coming Wednesday/Thursday.
For now, I have to get back to preparing for a job interview tomorrow at which I'm not likely to discuss Arab film; I think it will be about statistical data analysis and such. Interviews, finally: there's another on Friday with an electric power company. Yay! Wish me luck.

I met Sufyan and Abdallah Omeish, the brothers who directed Occupation 101. They're nothing if not passionate, and it's amazing that such young people have done such important work.

There were also: Maya Sanbar, the très beautiful BBC documentary filmmaker and co-director of Goal Dreams, who not only knows how to make a great film, she knows how to fund and sell; Stephen Olsson, who directed the reportedly psychedelic Sound of the Soul, which was presented at the festival with Improvisations, a film about the oud, which was probably a delicious work.

I met Samir Nasr, who directed Seeds of Doubt (English title of the German Folgeschäden.) I have a few goals as an actress, one of them is to work with this man. I suspect he's that brilliant. He's making a film in Arabic next, and I'll someday soon be fluent in Arabic.

As a film festival volunteer, I met other volunteers, attendees, judges, directors, actors, and organizers. If there's a heaven, the people who organize a beautiful thing like this are definitely going there.

I was a little shy about handing out my newly-made headshot/acting-resume card.

I felt very beautiful in a small-world of very beautiful people. I felt very beautiful at the afterparty - dancing in the gorgeous dress (completely gorgeous, I tell you) that a friend in Sana'a had given me when she learned of my missing luggage. I was the stuff of dreams in that dress. I loved living in French and Arabic, learning about the human condition, being in a social condition, having a brand new boyfriend and many new friends...

More Film Links
AFF has organised several other film events following the wild popularity of the main event last year. How I would love to attend them all. In particular, it's co-presenting films at the 50th annual San Francisco International Film Festival.

I first wrote about some of the films (Occupation 101, A Stranger in Her Own City, Goal Dreams) in this September 2006 post.

I once met a friend of the guy who directed this vegetable animation called T-Day. I just love the filmmaking in T-Day, and though I can't say I understand Lior Chefetz's other films to date, he's clearly a star filmmaker in the making.

Found on the myspace page of Occupation 101. Join their myspace!!!
Posted by t at 1:13 AM 8 comments:
Email ThisBlogThis!Share to TwitterShare to FacebookShare to Pinterest
Newer Posts Older Posts Home
Subscribe to: Posts (Atom)