Posted by t at 2:51 PM No comments:
Email ThisBlogThis!Share to TwitterShare to FacebookShare to Pinterest

I'm Too Old For Youth Lunch

I didn't go to this week's Youth Lunch with the President of Nigeria. I got a couple of invitations by email and text, to which I answered, "how many diners will be at the lunch?" Since I had no assurance that it would be a somewhat exclusive lunch - you know, eba and egusi soup with orange juice around the table with Mr. President - and not a rowdy carnival with us jamming to D'Banj music, I decided to respect myself and save my money.

Brings us to two related reasons why I didn't bother:
1. I turned 30 this month. I declare myself a retired youth. Since I am older than 2/3 of Nigeria's population, don't you think I ought to be considered a full-grown citizen and not part of an age-deficient interest group? In some villages, I would already be a young grandmother.
2. The small money I have should not be spent "entering moto" to attend frivolous events. That said, I was sure they would "share money" at the "lunch" and this would just be embarrassing. I am too broke for jokes. Yet I don't feel like joining the mindless feasting on the Nigerian treasury.

You see, this President embraces all interests groups, with a wide PDP umbrella indeed. It's just that I want to be loved differently. Not with jollof rice, Naija music, and transport fare, all of which last a short time, but with good policies, more megawatts, and a working government which will last for generations.

Big Grammar version: Nigeria: The Youth at Lunch with Jonathan 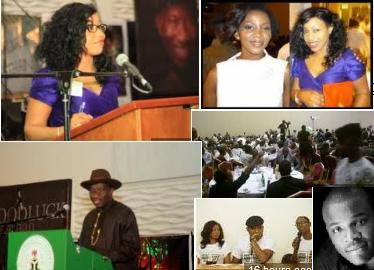 Posted by t at 4:34 PM 11 comments:
Email ThisBlogThis!Share to TwitterShare to FacebookShare to Pinterest

I found this months ago in the e-book From Dictatorship to Democracy.

A Fourteenth Century Chinese parable by Liu-Ji, for example, outlines this neglected understanding of political power quite well:

In the feudal state of Chu an old man survived by keeping monkeys in his service. The people of Chu called him "ju gong" (monkey master).

Each morning, the old man would assemble the monkeys in his courtyard, and order the eldest one to lead the others to the mountains to gather fruits from bushes and trees. It was the rule that each monkey had to give one tenth of his collection to the old man. Those who failed to do so would be ruthlessly flogged. All the monkeys suffered bitterly, but dared not complain.

Before the small monkey was able to finish his statement, all the monkeys suddenly became enlightened and awakened.

On the same night, watching that the old man had fallen asleep, the monkeys tore down all the barricades of the stockade in which they were confined, and destroyed the stockade entirely. They also took the fruits the old man had in storage, brought all with them to the woods, and never returned. The old man finally died of starvation.

Yu-li-zi says, "Some men in the world rule their people by tricks and not by righteous principles. Aren't they just like the monkey master? They are not aware of their muddleheadedness. As soon as their people become enlightened, their tricks no longer work."

Posted by t at 1:18 PM 3 comments:
Email ThisBlogThis!Share to TwitterShare to FacebookShare to Pinterest

What are you reading?

I'm reading Great Scientists, a "children's book" by Victoria Sherrow. Bought this one years ago as a gift to my sisters, learning a lot these days reading its biographies of Pauling and Einstein, Oppenheimer and Fermi, Compton and Goddard, and a couple of biology researchers named Thomas Hunt Morgan and James Dewey Watson.
No chics on this list.
No chics on the list of Nigerian governors either.

On Thursday, I attended this year's speech and prize-giving ceremony at my alma-mater, Queen's College. Those students are the females who will someday make those lists.

What was special too, was that I live-blogged the event for my classmates. A summary will appear in the paper soon (Update: read online).
Posted by t at 4:12 AM 2 comments:
Email ThisBlogThis!Share to TwitterShare to FacebookShare to Pinterest

Ribadu moved on, nice and quiet

Nuhu Ribadu only received 7% of the vote in the April 16th 2011 presidential election, but no problem, he has already returned to his job at the United Nations. He's visiting Afghanistan as an anti-corruption expert for the UN.
I meant to vote for Ribadu but was too busy covering the elections. Maybe I should join the ACN? Even if the political parties are all corrupt, Fashola and Ribadu at least represent the action required for development.
Posted by t at 2:14 PM No comments:
Email ThisBlogThis!Share to TwitterShare to FacebookShare to Pinterest

You know I work at a news organization, but not as a writer. Well, I wrote something this morning: Arnold Schwarzenegger and Maria Shriver announce separation.
Not bad, eh?
Posted by t at 10:25 AM No comments:
Email ThisBlogThis!Share to TwitterShare to FacebookShare to Pinterest
Newer Posts Older Posts Home
Subscribe to: Posts (Atom)