3.  MORTAL MAN by Kendrick Lamar, with unofficial video by Life Plus+ MUSIC


5.  HAMILTON clip performed by the cast from the Broadway play at the 2016 Grammies


This year, three of my five are not even really music-videos in the traditional sense of being planned or storyboarded and shot to support a short music recording.  All of the five are very interesting.  I wish I could show you more.

Cystic Fibrosis and the common cold

It was the pineapple.  Pineapple is one of the most excruciatingly delightful things God made way back when God made all the foods we know, and so sometimes I would peel a whole pineapple and eat it.  All.  At once.

A few years ago, I got very ill, and after about a week, learned that pineapple poisoning had started it.  I read that in the past, women would pop unripe pineapples to induce abortion.  In my case the baby was, a scary giant object from my digestive tract.  After which I was very weak.  After which I had a cold and sore throat.  After which I had too many Strepsils, which caused vomiting.  After which I had all types of illness and strangeness for days before I figured out what the original cause had been from typing all those symptoms in my little phone and studying like crazy.

So generally I wouldn't eat a whole unripe pineapple nowadays.

I caught a bad cold / sneezy ticklish flu last week.  The weather's been odd; it's been hot out, and I got in air-conditioned situations once or twice, which is usually a bad idea for me.  I was exposed to people with bad colds too.  But I still expected to escape catching it.
For many years I caught colds a lot - practically the only illness I get often, but I've been relatively strong and healthy for years, probably because my life is quite stress-free, change-free, the weather's tropical, and I can usually afford the time to rest, eat, and do all those self-care things when a cold seems to be near.  Oh, and I live in a CAVE.

I ended up catching it, but now I think back and see that it was pineapple that "caused" this.  Again I ate the whole thing.  It was very sweet but very acid, and even while I was eating it I felt the danger, it was too acid in my mouth and in my chest/tummy.
Now after the whole disequilibrium experience (I suppose that's what a cold is, sort of), I studied a bit about what happens - mucus overproduction/oversecretion, ... and the cardinal example of that experience, the genetic disorder called CF (Cystic Fibrosis).  It's helping me understand my health.  For instance, some exercise would be nice for moving the mucus along, but I never really do that.  Saline (salt water) and inhaling steam does good things for relaxing the hyper-secretion thing.  I've been hungry and tired all the time because nutrient absorption is broken down when the mucus linings (they're not only in your respiratory tract) are acting crazy.  So I've been attracted to slightly salty, fatty, meaty things (I usually have like zero of these in my diet) and even felt a need to drink sweet stuff and sugar (again, usually not my thing.)

I was feeling lazy about writing this, and yeah, I could have done a better job writing...with relevant links and such.  My main point is that to understand what's up with influenza/flu/colds/catarrh, we can draw from CF research.
For me, I now understand a bit better the connection between acidic food (vs salt) and dehydration (used to get dehydrated a lot too) and the mucus response which may lead to a cold.

By the way, if the genetics of CF are so similar to those of sickle cell (autosomal recessive, as they call it in biology), then I wonder what, if any, benefits caused CF to be retained in the population.  That is, are carriers (people with one inherited CF gene, not two) in some way at an advantage, say because they withstand cold/dry/mountain/winter better with their mucous-y superpower?  As you know, sickle-cell is common in the tropics and in terms of genetics (natural selection) it's a thing that exists because carriers have some immunity to malaria...then in a fraction of those cases, the sickle cell genes are doubled and the "too much of a good thing" is a bad thing, i.e. the disease/syndrome.   Just as SS is a black-people thing, CF is a white-people disease.

For me, I need heat and humidity.
Explains why I was withering even in Southern California.  Someday, I may try living there again, but a half-hour coastwards, the real Los Angeles, with better humidity.  Of course I loved New Orleans too.  Florida is nice weather, but too many ass-holes live there lol, it's really a pity.
Explains why I do well provided I do NOT have air conditioning...I go to great lengths to avoid an a/c lifestyle.
Explains why Lagos rocks! but not Jos.
Why I'm afraid of white-people countries :)
Why Washington DC was actually better for me, weather-wise, than Cali.
I feel sure that another possibility would be to be a big eater, lol, to be so fat that there's always some sort of reserve (of salts and fats) to balance out the environment lol.  But nah, I'm not willing to do that.  Puerto Rico, anyone?

I feel good now.  My ear tickles a bit, and the cold is not 100% gone, maybe 96 lol.  I hope after this goes away that long term my susceptibility actually really goes away :) like it did before.  And hope I can resist the temptation to overdo it with pineapple in future.  Like, I should try new excitements -  tomato!  carrots!

One last thing, some years ago I learned that blowing heavily when you have a cold only makes EVERYTHING worse.  I seem to have forgotten that this time, and got back to my highly-entertaining (or annoying) elephant trumpet noises.  Which explains why my ear got infected too.  So yeah, if you have a cold, don't blow so hard, it creates all these pressure differentials so you just fill up with more mucus and probably fill up new spaces - like in your ears - with more mucus.

One more thing - I tried to avoid this bit for modesty's sake, but hey we're medical people so let's say it.  About the mucus linings in 'za other room' ... how they respond to diet - they do!, and how their hyperactivity is correlated (positively) with the propensity to get a runny nose.

Advertisement: Read my books. ###Three Sisters, novel #1 here###
Posted by t at 8:45 AM 4 comments:
Email ThisBlogThis!Share to TwitterShare to FacebookShare to Pinterest

Sometimes, adults really have something to teach us

My father phoned yesterday (December 6) but I didn't really feel up to talking, even with the promise from my horoscope that it might leave me feeling more grounded.


I'd better go and phone him now/today before the astrological magic wears out lol.  Love you, dad.

--
In other news, the mental prisons of female so-called beauty are broken down by a girl named Amy Schumer.
The backstory is she has been cast as Barbie and people are annoyed because she is fat compared to their beloved Barbie idea.

Very very honored to be nominated for 2 Grammys and to be considered to play an important and evolving icon. Is it fat shaming if you know you're not fat and have zero shame in your game? I don't think so. I am strong and proud of how I live my life and say what I mean and fight for what I believe in and I have a blast doing it with the people I love. Where's the shame? It's not there. It's an illusion. When I look in the mirror I know who I am. Im a great friend, sister, daughter and girlfriend. I'm a badass comic headlining arenas all over the world and making tv and movies and writing books where I lay it all out there and I'm fearless like you can be. Thanks to everyone for the kind words and support and again my deepest sympathy goes out to the trolls who are in more pain than we will ever understand. I want to thank them for making it so evident that I am a great choice. It's that kind of response that let's you know something's wrong with our culture and we all need to work together to change it. Anyone who has ever been bullied or felt bad about yourself I am out there fighting for you, for us. And I want you to fight for yourself too! We need to laugh at the haters and sympathize with them. They can scream as loud as they want. We can't hear them because we are getting shit done. I am proud to lead by example. "I say if I'm beautiful, I say if I'm strong. You will not determine my story. I will" #thegirlwiththelowerbacktattoo
A photo posted by @amyschumer on Dec 6, 2016 at 12:10pm PST


I love comedians for this: like modern-day court jesters, they are experts in the ridiculous, and related to this superpower, they have terrific bullshit sensors.  They are people I can trust to teach me something about truth and falsehood in human beings and relationships.  Which beings me to the meat and potatoes, the main course, of this blog post: 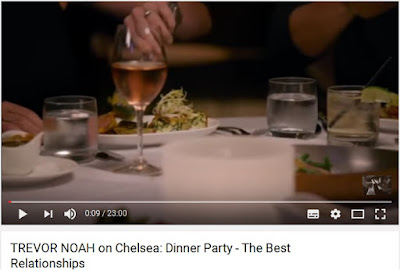 Watch the 'dinner party' conversation as Chelsea Handler, Sarah Jessica Parker, Trevor Noah, Julianna Margulies, and Morgan Spurlock discuss relationships in the context of that multidimensional life that has some work relationships, family relationships, present and past favourites, all recognized and given due respect.  Details.  Alternative video link.

Advertisement: Read my books. ###Three Sisters, novel #1 here###
Posted by t at 9:37 AM No comments:
Email ThisBlogThis!Share to TwitterShare to FacebookShare to Pinterest

I want to read everything

I enjoyed this history of global cities and find the Guardian UK's 'The Story of Cities' series very inviting.  Pity I can't read everything.

Me getting out of the ocean with my man.
A photo posted by Danny Pellegrino (@dannypellegrino) on Dec 1, 2016 at 8:43am PST


I've been not-writing.  But reading everything.  Not books so much as 'the internet.'

The other day I watched Ran (Kurosawa).  One of the best films I've ever seen, in that it would fascinate anybody...from art-snob to clue-less.  It should totally be remade as a Yoruba film.