A directory of wonderful things

2. French Money Talk at www.blogCFA.blogspot.com is the newborn counterpart to UpNaira / Money Talk.

Also wanna know:
James Joyce via Ulysses
Poincaré via his writings
Posted by t at 3:05 AM 3 comments:
Email ThisBlogThis!Share to TwitterShare to FacebookShare to Pinterest

When will you marry? This year? Next year? Sometime forever?
Who will you marry? Rich? Poor? Beggar? Thief?
Which car will you enter on your wedding day? Wheelbarrow? Bicycle? Danfo? Mercedes?

I think the good answers were Mercedes, rich, sometime forever,...actually i was never really sure what "sometime forever" or "lailai forever" meant, or if we were saying something else that actually made sense. This was the song for a skipping game, so for example if you stopped/tripped on poor, then I guess the other kids had a good laugh. Or if you answered "this year" - a little too young.

The sun is back, and the hopefulness and happiness of the season makes me think about who I will marry. So many exciting choices, it's ridiculous that you're expected to stick with one forever.
So...
I'm building a marriage team
One Rufus, one Nadal, maybe Nadal AND Federer. I dumped Tiger years ago, before he dumped me thank-you-very-much. My boyfriend Raj reminds me that Rufus is "flaming gay." Hmmm.

I saw de Villepin on TV the other day - brilliant guy. He'll be the "seasoned" one in my little fraternity.

Might as well throw in a physicist. They have sharp minds and know something I want to know. I know a few hot physicists. Maybe a good mathematician for the same reasons.

I still like my Portuguese/Angolan João Ricardo from last year...why isn't his career as stellar as his World Cup showing? Well, I would love to help him figure that out - on the coast of Portugal.

There really should be a Nigerian on this list for the whole shared homeland and possibly shared language thing, but I like never meet them.

Who did I forget?

I have baby names too.
A number of Yoruba names - WURA (treasure/gold?) and AYO (joy) as in Ayokunnu/Ayokunu - I knew lovely girls by those names when I was a kid. I like the fact that Yoruba names are largely gender neutral.

FELA is another, as in Fela, although I still don't know what it means. (Let me know if you do.) There's also INULEWA from family lore. It was my grandfather's nickname, and means inside + is + the value.

In non-Yoruba names, there's ANNELISE - a complex character from my favourite film - and ALEXANDER/ALEXANDRA of course.

There's COCO - not just the name of a fashion icon, "Aunt" Koko was a super-cool neighbour when I was a kid living in one of the world's most beautiful places.

I must really like light, because I also have CLAIRE, LUMIÈRE, and CANDÈS in my top-ten.

My runners up are
LUDWIG, AMADEU,
ANNA,
APRIL, MAY,
NERO, NEO,
NEHRU, SUPRIYA,
UMA, MALA,
AMEERA, SAMIRA/SAMEERA/SAMIR,
FARDOOS/FARDOWS - I'll have to be feeling really high to name my kid "paradise, as in the Muslim's afterlife" but giddy happens.

I've always thought Daniel was such a good, fortright person's name, Goke a very pretty boy, and Jonathan a good and loyal boy - this comes from David and Jonathan when I was a kid, I think I was the narrator and, thanks to my mum, the best dressed narrator ever in my pink butterfly dress which I just loved. The tall boy in my class, a complete sweetheart named Efanga, played Goliath. There were "crowds" of Philistines and Israelites. Anyway.

When I was more Christian, my favourite names were Jonathan, Joshua, Joel. I knew their meanings. I don't know if I picked girl's names. Oh cool, I was really young, so those were possibly names for the love-of-my-life, not the kids. I still don't know why people promise to marry only one - that can't be easy.

It's important that all the names don't mean something silly in a major world language; they may have to go to school somewhere exotic and I want to be kind. It's not easy to find names that fit the bill actually: if you try to exclude all the words that translate into giggle-worthy words in say 10 major languages - no funny body parts, no unpronouncable letters.

Nick is a big joke of a name in Arabic. The Norwegian Kora and Tone were small jokes. Kora is a (sports) ball, Tone is tunafish.

Rufus would need to sell more records (opera or whatever) to get people to start naming human children that again, since it seems to have taken hold as a dog's name - why oh why? 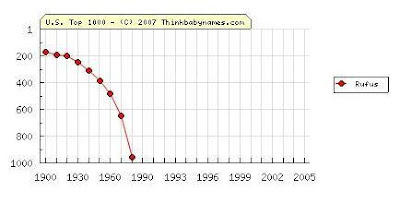 The letters "gb" and "kp" in Southern Nigeria, nobody in the West has those. And the Arabs make "p" into "b" - there were two blackbirds sitting on a wall: one named Bita, one named Ball.

As the joke went when we were in school, the phroblem with the pheephle phrom the northern phart oph Nigeria is that they do not know how to phronounce the letters eph, phee, and phee. So f, p, and v, are sort of dangerous letters too.

Wow, I need to get a job.
Posted by t at 9:14 PM 15 comments:
Email ThisBlogThis!Share to TwitterShare to FacebookShare to Pinterest

My first pop concert ever was Rufus Wainwright, last month at the Palace of Fine Arts in San Francisco. My groupiehood while now concert-certified remains at a comfortable orange intensity, since I feel like I know him so well already. Next time I'll make more of an effort to talk to him or something.

Before l'arrival de Rufus on stage, I'd started to warm up to the opening act Teddy Thompson, who's much younger/hotter than I imagined - he's a country musician after all, and they're not supposed to be so metrosexual. He plays awesome guitar, lovely voice too, and is an old family-friend of El Rufus. His music is so modern, it barely qualifies as country.

Rufus is a totally stylish guy. He had this sash or something around his hips, stripes and colours all around, and great new cowboy boots as he sashayed on stage. He's so look-at-me. He played mostly the new stuff, backed by a very energetic percusssionist and four/five others.

Try I'm Leaving For Paris and more, while I try to find video footage of him channeling Judy Garland.

11 days later: No Judy Garland video yet, but there's this and hundreds more on youtube. Rufus make great success.