Lara Bajomo was this gifted vocalist back in Queen's College. Now she's Lara George, the woman who gave us Ijoba Orun (the kingdom of heaven) - the gospel recording that causes goosebumps in young and old alike.


Dare Art Alade attended King's College, performing in a KC-QC operetta (championed by the QC principal) around 1997. He performs as Darey. Although he has several hits in several genres (usually R&B), I think it's this performance - his rendition of Sisi Eko - that will be played into the 22nd century.

Posted by t at 12:31 PM 3 comments:
Email ThisBlogThis!Share to TwitterShare to FacebookShare to Pinterest

THE WINNERS OF THE 2011 NIGERIAN BLOG AWARDS are:

Posted by t at 4:46 PM 2 comments:
Email ThisBlogThis!Share to TwitterShare to FacebookShare to Pinterest

Smart and Dumb, Yin and Yang

Soon after my last post, I started to think I was wrong. The research "system", centered in the United States, has evidently succeeded in producing cures, patents, missiles, NASDAQ, ... I should appreciate that at least things work in that sense, and that scientists are guaranteed a middle-class income and higher.
But then I got support from people who say, yes, that is what I'm going through or went through. So add depressed practitioners to the list of products of the research system.

Why this system? Well, division of labour is a fine thing. It makes experts, and experts are better at what they do, they are faster too.
It is also a sad thing. Here are some fundamental problems.

REPETITION IS BORING AND SOMETIMES UNHEALTHY
If you worked on an automotive assembly line (assembly lines are the apex of division of labour) , everyday for several hours you could be tasked with aligning part No. 123xyz to anterior of exhaust manifold. Repeat repeat repeat. At some point, most people would crave a change, would get repetitive stress injuries, ...
So also some people love science but can't find a "station" with tasks that match their needs. I think of the physicist I know who suffers most in science, and this person is the most engaging and well-rounded person, and THAT is the reason he suffers. I was told earnestly that I have "many interests" and THAT was a problem. Imagine a student with varied interests. Who was it that said, don't let education get in the way of your learning! Ah yes, some Mark Twain character.

LEADERSHIP MISLEADS
Another problem is that management in the factory is not perfect. For example, Michigan management (the Governor, the suits, or the lobbyists) continues to engage you in producing cars when the thing that ought to be produced is not cars but flowers for instance. It is good that policymakers in the US determine to spend $10bn on cancer or $10m on collision avoidance in unmanned aerial vehicles, but the quest for money and "success" forces scientists to reflect all day long on those matters, and on presenting answers to appeal to a certain group of reviewers. This means that the many other ways of thinking about the world, the many other matters they might have explored, have to wait.

WHO IS YOUR MASTER?
In particular, the fact of research having its spiritual home in the US means that academics in Nigeria ape the US rather than research our own world. Because their management says "write ten papers" or "publish in International journals." So instead of taking gross mechanical measurements of bamboo (an important building material nowadays), you think to take micro-mechanical measurements (since that's what the white man did for steel centuries ago).
The gross measurements might turn up results that are relevant to construction, housing, and maybe more. The micro-measurements are useless but could conceivably be built upon for publication.
To do the gross measurements, you might have to rig your own measurement device and language. To do the steel-type measurements, you would fit in, in fact, you would import fancy equipment from Europe.
So...what do you do? Primitive manual labour? Or publishable science?

It is similar to the crisis in our literature, which is that since it's hard to sell or distribute to the 1 billion Africans and thereby make a living writing for Africa, Nigerian writers sort of have to ask first, "what does my master at some stepping-stone Western journal or media house like?" (To which I say look at the local music and movie industries and be encouraged: as soon as we unclog a few channels, Africans can serve our local markets as well as the world.)

RE-THINK WHAT WORKS
Well, it just occurred to me that the subheadings reproduce the classic economic questions (so stale that it makes me sad that students still learn this as "economics" and not "history") - What to produce, How to produce, For whom to produce.
It seems that division of labour solves problems in each area:
How to produce - chop up the tasks,
What - let the boss decide,
For whom - I guess whoever can pay.
Then it introduces problems in each area too as shown above: drunken leadership organises you to produce the wrong thing, past efficiency gains from dividing labour lead to more mindless dividing, and the poor and recently-poor are perennially under-served. 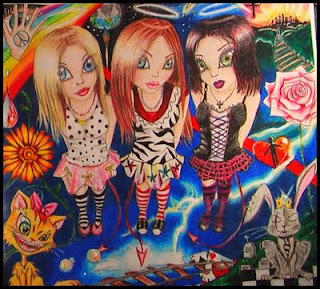 Picture: My liberty, by yin-yang-destinity (on deviantart.com)

I have an old book titled Re-engineering the Corporation that has little useful to say. Still, it was a bestseller for stodgy mid-1990s managers, and the authors suggest that division-of-labour along functional lines might be overhauled in ways that create better outcomes for the firm.
So, don't wait. Overhaul.
Posted by t at 8:37 AM No comments:
Email ThisBlogThis!Share to TwitterShare to FacebookShare to Pinterest

One dumb thing about science

how is research? I got released from
Caltech recently (changed from
sabbatical to separated) but when I'm
ready got to get back to science. That
said, glad I left. The dumbest thing
about science is how small the audience
is. Why not speak / write to be
understood? Why not enter policy
decisions on occasion? Why not derive
which problems to solve from nature and
society? I mean, the exercises are very
useful, the edifices of theory, very
beautiful even, but if you ever feel
hungry for a change of diet, go for it, I
promise it will aid your science. (And
that ends my sermon lol)

- From a message I just sent to one of the physicists in my life.
Posted by t at 7:00 AM 1 comment:
Email ThisBlogThis!Share to TwitterShare to FacebookShare to Pinterest
Newer Posts Older Posts Home
Subscribe to: Posts (Atom)