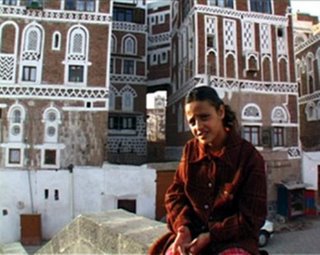 I just got back from the Arab Film Festival.

The first film I saw there was a short documentary shot throughout Sana'a and titled A Stranger in her own City. It was utterly emotional for me to see video of the place and to watch a girl living out loud in a culture that has other ideas for people of her sex.

Next I saw the equally captivating Goal Dreams. Days later, I met Morad, a Palestinian and American who was prominent in this film about the quest for a World Cup qualification for Palestine. I said "you were in the film" and we introduced and smiled and...quit smiling and parted ways.

The ONE film from the festival that I want everyone I know to see is Occupation 101. Wait for its release, get it, have a viewing party. Let's get the word out and move towards peace and away from stupid violence.

Sadly, most of the films I saw were so good that I anguish over each one I didn't see. (It's impossible to see all the films at this festival, but that doesn't console me.)
I'll write more about the week's movies soon.

San Francisco loves me
Maybe I'll move to the San Francisco Bay Area soon: on this trip, besides watching a lot of films and hearing a lot of Arabic, seeing and liking Berkeley, reading about bonds and stocks, and detoxing from my addiction to toiling on the Web, I met a number of lovely people, some of whom want me to live closer to them.
Posted by t at 6:22 AM 1 comment:
Email ThisBlogThis!Share to TwitterShare to FacebookShare to Pinterest

I had a soul-mate all along

It's pleasing to think that I'm so connected to someone, though scary because I want him to stay alive. OK, it's not so scary anymore.

My mother often said I should have been a boy/man.

I'm looking forward to figuring out my hairstyle(s) for work.
Posted by t at 5:08 PM 1 comment:
Email ThisBlogThis!Share to TwitterShare to FacebookShare to Pinterest

Your money or your life

Just saw this quote on 43 things:
When we go to our jobs, we are trading our life energy for money. The truth, while simple, is profound.
The New Road Map is one attempt at a fair trading strategy.

I have an over-the-phone job interview this morning.
I am genuinely very interested in working at En*, and assume
1. I will do great work here
2. my interest will die out after a short time
Ideally, I'll work here for (a few/many) months, and later go to work somewhere else.
To work "somewhere else," I need to read gobs of finance.

This dead Aussie clearly lived out loud - the way we ought to want to live.
Posted by t at 8:16 AM 3 comments:
Email ThisBlogThis!Share to TwitterShare to FacebookShare to Pinterest
Newer Posts Older Posts Home
Subscribe to: Posts (Atom)