will.i.am and others (Miley Cyrus, French Montana, Wiz Khalifa) in Feelin' Myself

Do you want to see some regular A+ music and music videos?
Here's a little list:

Started From The Bottom, by Drake.  His happiness was overflowing and infectious in this video, so much that I easily aped his dance moves when I heard the song again, and I could see why it won BET Best Video Awards.


Rich and Famous, by Praiz was actually released in December 2012.  Beautiful voice.  And he did make good and buy his mum a Range soon after the video :)


Suit and Tie, by Justin Timberlake from January 2013.  This preview "lyric video" is many times better than the later "official video" for the track.   Enjoy it.  Learn some cool from the master.
Posted by t at 6:09 PM 3 comments:
Email ThisBlogThis!Share to TwitterShare to FacebookShare to Pinterest

Let's check out some music videos to end the year.
This first one will make you dance.  I love it.  It's called Somori.  By Omawunmi.  She's dynamite!
What in the world does Somori mean anyway?

I just found this jazzy tune and artsy video by a Malian (Malinese?) singer named Inna Modja.  She's such a hottie.  It's called French Cancan or Monsieur Sainte Nitouche.

Then there's a new artiste in Nigeria named Seyi Shay.  I love her dancing in this video for Irawo (Yoruba: star).  She has some other excellent music and drama-filled videos too.

This is only the beginning: I want to put up my best five (music videos) of 2013 in a couple of days.  Hint: none of these three makes the list.  What are your top five?
Happy holidays.
Posted by t at 12:36 PM No comments:
Email ThisBlogThis!Share to TwitterShare to FacebookShare to Pinterest

You may have noticed my new obsession with free online courses, the so-called MOOCs.
Here are the courses I'm actually taking/seriously considering:
My experience so far is recounted here.
I have ambitious plans (too many courses) for January/February.  Will probably drop something.
Happy holidays!
Posted by t at 11:47 AM 6 comments:
Email ThisBlogThis!Share to TwitterShare to FacebookShare to Pinterest

The world has gone mad again?

It's hard to believe these headlines are from 2013: purging and executing, ignoring refugees,protesting and barricading, executing by hanging, captured rogue CIA.  Crazy day in the news. 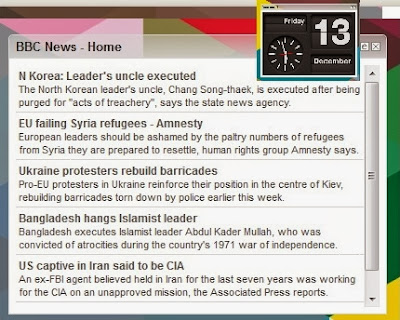 Posted by t at 6:11 AM No comments:
Email ThisBlogThis!Share to TwitterShare to FacebookShare to Pinterest
Newer Posts Older Posts Home
Subscribe to: Posts (Atom)