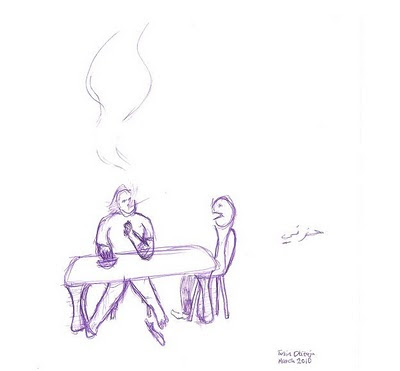 "Hezni," my beautiful friend Adam used to say. Hezni. After every sentence. Day one, when we met in Cairo near the now-famous Tahrir Square, we sat and talked for several hours, me drinking karkadiya, while he had _ (what was his drink? that bitter, maté-like thing perhaps?)
Hezni is literally "my sorrow" and he used this slang to mean "crap." Hezni this, hezni that, while he checked out my Nubian behind and hoped. :) I will never forget him.
One time we drank in a large coffee shop called "Arabesque" that had rough women flirting with richer men. I drew this nearly two years later, in 2010.
Posted by t at 3:27 AM
Email ThisBlogThis!Share to TwitterShare to FacebookShare to Pinterest

Heinz go with lots of palatable Yum-Yums. But Hezni- if that is a brand name for crap, will never go with anything, not a great coffee brew. Coffee! OMG! If you make a great cuppa, i'll mary you, and serve you breakfast-in-bed happilly ever after.

P.S. No coffee skill here - drinking nor brewing. But I love food, breakfast in bed is the dream y'all. Let's?