Daytrips to the heart of Yorubaland - Osogbo, Ado Ekiti - a tale of food and palmwine

Just got home from a visit to my job in Ogun State and upon unpacking my bag found: three guavas, a pawpaw, two grapefruits, one pineapple, a salad with dressing, three pairs of costume earrings...guess I'm really in the mood for fruits...turned on the inverter so I could use my laptop to tell you that, "washed my hands" euphemistically speaking, and chugged some palmwine.

In the past few days, I've done two short trips to Oshogbo and then Ekiti.  I still have one wrap of aadun left from Ekiti and one 50cl bottle of palmwine.  Bought the pammie on the road, sipped some on the 4.5 hour trip.  Got back in town and went straight for some pounded yam and edikaikong at my usual poundo joint.  Sipped a little more after.

The aadun from Ekiti is, as usual, wonderful.  It's better than the one I bought in Oshogbo that was wrapped in  cellophane instead of whatever mysterious leaves, and ran with palm oil instead of holding it together. I don't love beans, but I love aadun which is made from beans, corn...

The best thing I ate on either trip was a breakfast in Ado of "dodo oniyeri" - basically fried plantains  embedded in a fat egg omelette.  It was served with a (shredded) fish stew.  Lovely.

Not sure where one can get good aadun in Lagos; or palmwine (although there's decent, bottled palmwine abroad), or dodo Ikire.  Dodo oniyeri seems really easy to make at home though.

- Aadun - Not sweet, but excellent and super-nutritious.  Recipe.  Aadun must contain red beans, don't listen to those who say it's made primarily of corn; they don't know what they're talking about.

Pictures:
I attended the Osun Osogbo festival for the first time ever.  Good times.  Great town.
You know it's Ekiti when there are hills all around: 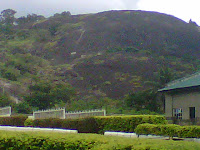 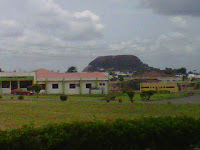 Posted by t at 7:10 PM
Email ThisBlogThis!Share to TwitterShare to FacebookShare to Pinterest

Fond memories of Dodo Ikire... assuming it is the same thing being referred to as Dodo Oniyeri.
Sold on the side of the road.

Love how you write.

KumKum! was just thinking about you. You should make some. Just make sure the egg is really thick - the one I had was thick enough to engulf three slices of dodo. Hi Juanito!

Cool cool cool. The festival, the food, the palm wine. The name "palm wine" has intrigued me since Amos Tutuola and his "Palm Wine Drinkard" . . . What does it taste like?

what does palm wine taste like? somewhere between white bread (imagine it soggy/liquid in your mouth) and Smirnoff Ice.

If you're in TX, find an African restaurant or market e.g. Naija food Dallas or Nigerian food Houston. Call ahead, see if they'd deliver or something.

In LA, I absolutely recommend Veronica's Kitchen, which is in the rough parts of town, near LAX.

In most major cities too, DC/MD, NY, etc, there's a Nigerian store/restaurant with the good sense to stock palm wine.

What it looks like? Pictures of palmwine online - the bottled kind is very light, almost like water; the most local kind includes a sediment almost like beach sand...

OK, go ye and "research" this.

I want to taste dodo ikire, never had it before

Just go to Ikire :) I think it's in Osun State, so just beyond a Lagos-Ibadan trip and on your way to Erin-Ijesha waterfalls, or Oshogbo, or Ekiti.
I think it's sold in Lagos too (Lagos_Abeokuta expressway) but that could be my imagination.

Will do - many thanks on the insight~~!

Was at Freedom Park in Lagos yesterday and they def sell palmwine. One more reason to visit again soon. Also, Freedom Park is hosting Felabration all this week, with shows every evening from 7-11 (today till Sunday) and the biggest shows being Sat and Sun (I think they have a Marley and a Kuti playing). It's a nice space with actual fountains and sculpture and completely in the Center of town near so-called Marina.

Is the priestess a white woman? White ppl with cornrows...[shudder].